In response to the request of the "Public Awareness Raising Meeting on Promoting Measures against Antimicrobial Resistance (AMR)", JPMA is carrying out several activities aimed at increasing public awareness of measures against AMR. The number of antibacterial drugs* that are not effective against antimicrobial-resistant (AMR) bacteria is increasing, and this is becoming a global threat. We will continue our educational activities in order not to increase the number of drug-resistant bacteria.

Please consult your doctor or pharmacist if you experience any symptoms of concern while taking your medication.

Survey on Physicians’ Perception of AMR This article is a research report related to AMR prepared by JPMA and the Office of Pharmaceutical Industry Research (OPIR) members.
In this article, in order to widely understand the situation related to the development of antimicrobial drugs in Japan, we investigated and
reported the following 3 points:

We also mentioned and indicated the issues related to the development of antimicrobial drugs. 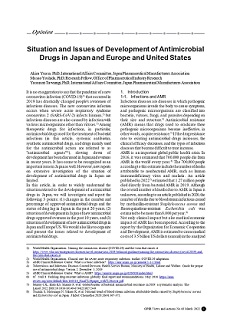 Feel free to link your site to ours. The following 3 versions of the AMR promotion
video "STOP AMR" can be downloaded. JPMA is also engaged in AMR awareness raising activities for young people. We created educational content about AMR for elementary and junior high school students and posted it in the "Gakken Kids Net, Summer Vacation Free Study Project". Children can learn about the dangers, causes and prevention measures against emergence of antimicrobial-resistant bacteria with interest through free research and home study.

With the cooperation of Qol Pharmacies, the AMR countermeasure promotion video "STOP AMR" created by JPMA was played at the Qol pharmacy stores nationwide, targeting viewers during AMR countermeasure promotion month (November 1 to 30). In addition, we conducted a survey about awareness of AMR and the effect of the AMR promotion video to disseminate and enlighten measures against AMR. Regarding AMR, about 60% answered that they did not know about it so far, and more than half of them answered that they have deepened their understanding of AMR after watching the video. The results of this survey will be presented orally at the 69th Annual Meeting of the Japanese Society of Infectious Diseases East Japan Regional Association and the 67th Japanese Society of Chemotherapy East Japan Branch General Meeting which will be held in October 2020.