On September 25, 2015, leaders from the 193 Member States of the United Nations gathered at the UN Headquarters in New York for the Sustainable Development Summit and unanimously adopted “Transforming our world: the 2030 Agenda for Sustainable Development.”Before an agreement was reached regarding the Agenda, there were seven instances of intergovernmental negotiations and three years of discussion involving NGOs, mayors of cities and towns, the private sector, and others. The Agenda was therefore formulated as a result of highly transparent processes. At the core of the Agenda are the Sustainable Development Goals (SDGs).

The SDGs serve as an action plan showing a global agenda to be achieved by 2030, and will serve as guidelines for the international community. Aimed at creating a society where “no one will be left behind,”the SDGs consist of 17 Sustainable Development Goals and 169 targets, including ending poverty in all its forms, combatting inequalities, and fighting climate change. The SDGs officially came into effect on January 1, 2016. 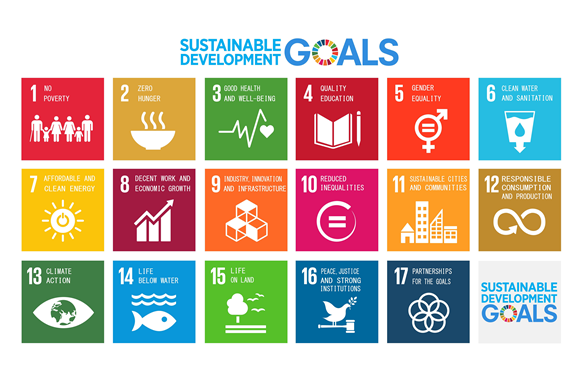 From MDGs to SDGs

The SDGs were formulated as the successor to the Millennium Development Goals (MDGs).

The MDGs were formulated by the United Nations in 2001 by integrating the United Nations Millennium Declaration, which was adopted in 2000, and the international development goals that were adopted at major international conferences in the 1990s. The MDGs consist of eight development goals for developing countries to achieve by 2015. Specifically, they are: 1) Eradicate extreme poverty & hunger; 2) Achieve universal primary education; 3) Promote gender equality & empower women; 4) Reduce child mortality; 5) Improve maternal health; 6) Combat HIV/AIDS, malaria & other diseases; 7) Ensure environmental sustainability; and 8) Develop a global partnership for development. While goals such as halving extreme poverty and combatting HIV/AIDS and malaria have been achieved, some of the MDGs, such as halving infant and maternal mortality, remain unachieved.

Based on the achievements of the MDGs, the SDGs are aimed at addressing a wider range of issues by considering economic development, social inclusion, and environmental protection, which are interlinked elements. While developing countries were the main subjects of the MDGs, the SDGs involve the overall international community, including developed countries. In addition, with emphasis placed on the roles of all the relevant parties, including not only nations and governments but also private enterprises, NGOs, and key figures, these initiatives are related to every single person worldwide.

The 17 Sustainable Development Goals are as listed below. United Nations Secretary-General Ban Ki-moon made the following comments with regard to the goals.
“The seventeen Sustainable Development Goals are our shared vision of humanity and a social contract between the world's leaders and the people.”
“They are a to-do list for people and planet, and a blueprint for success.”

It is stipulated that governments have the primary responsibility for follow-up and review, at the national, regional and global levels, in relation to the progress made in implementing the goals and targets over the coming fifteen years. To support accountability to citizens, a mechanism for systematic follow-up and review has been created by the United Nations. The high level political forum under the auspices of the General Assembly and the Economic and Social Council has the central role in overseeing follow-up and review at the global level. An annual progress report on the Sustainable Development Goals prepared by the Secretary-General of the United Nations and the Global Sustainable Development Report are used for follow-up and review.

Indicators are necessary for advancing this follow-up. In addition, the collection of accurate data is required to ensure progress in such a manner that no one will be left behind. The 17 goals and 169 targets are monitored and examined by using a series of global indicators on which the UN Statistical Commission has agreed.