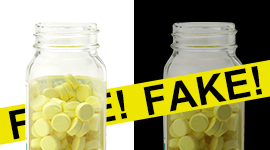 The threat of counterfeit medicines*1 is increasing worldwide, and the value of these products is said to have reached US$75 billion*2. In developing countries, it is reported that between 10% and 30% of distributed medicines are counterfeit, posing a serious threat to patient safety. Manufacturing and distributing counterfeit medicines while deliberately disguising them as genuine, authorized medicines results not only in patients being denied the desired treatment effect, but also risks causing physical disability or death due to unexpected effects. There have been confirmed cases of individual import of counterfeit medicines from overseas via the internet as well as associated damage to health.

In July in 2012, JPMA published a joint statement with the other major pharmaceutical industry associations, IFPMA, PhRMA and EFPIA, to support and encourage the efforts by national and international government organizations to reduce the illegal sale of medicines by illegitimate online drug sellers that endanger public health. In addition, the JPMA has made efforts to grasp the actual state of anti-counterfeiting efforts at member companies by regularly conducting a survey on counterfeit medicines among member companies.

As for Customs, cracking down on the infringement of intellectual property rights and trademark rights in particular via national customs agencies can be an effective tool as a countermeasure against counterfeit medicines.

Japanese police have cracked down on counterfeit medicines and have achieved successful results with seizures and arrests. In addition, Japanese police continuously participate in Operation Pangea coordinated by INTERPOLE, which is international joint law enforcement against illegal drug advertisement and internet sales. On September 2017, involving 197 police, customs and health regulatory authorities from a record 123 countries, Operation Pangea led to a record number of 25 million illicit and counterfeit medicines seized worldwide. it was more than USD 51 million worth of potentially dangerous medicines*6.

JPMA and its member companies contribute to maintain patients’ heath in Japan and developing countries by preventing the circulation of counterfeit medicines through raising awareness and close collaboration with MHLW, customs and police.

On the other hand, substandard medicines, which are the result of unfulfilled quality standards despite the medicines being approved and legally manufactured, could pose a serious health risk to patients, and JPMA strongly supports the highest standards for all patients across the world. We will therefore make efforts to solve the problem of substandard medicines using various methods, including where appropriate public-private cooperation, working to raise technical ability in developing countries to international standards.